As a convenient reference point, here are all the posts on the the recently released Edelman Trust Barometer 2016.

Given the Trust Barometer’s findings that the general public is (re)turning to the business sector to solve “big problems” it might not be surprising to discover that having the right focus matters for both a business and its leaders, for action impacts trust. 45 percent attribute a business’ contribution to the greater good as the reason that their trust in business has grown. Conversely, of those whose trust in business decreased, half cited a business’ failure to contribute to the greater good as the main driver.

I think there is a strong impetus for brands and organisations today to tap deeper into their brand purpose and corporate narrative – and communicate this through their leaders and employees. The Barometer’s findings reinforce this: The public is responding positively to CEOs trying to realize the dual mandate of profit and societal benefit, as CEO trust has risen substantially in the past five years to 48 percent.

A strong brand purpose and corporate narrative is also valuable for internal engagement and morale. When business—and more speciﬁcally when the CEO—is involved in societal issues, employee advocacy and engagement increases. When a CEO is engaged in addressing societal issues, an employee’s motivation to perform escalates by 22 points. Similarly, an employee’s willingness to stay working for the company climbs by 22 points, and inclination to recommend the company as an employer grows by 25 points.

According to Kathryn Beiser, global practice chair of Edelman’s Corporate practice, “Business can be a big part of the solution because it is apolitical, fast, and tracks its progress. Now is the time to lead from the front with the support of their employees and passionate customers. No longer can business leaders focus on short-term goals. The new model CEOs are taking action by addressing the issues of our time, and taking a personal interest in the success of society. Stakeholders expect business to have a solid and steady focus on financial returns, but also on actions around key issues such as education, healthcare and the environment.”

Given today’s increasingly fragmented media landscape, the rules of engagement have changed. Engagement that builds trust and reaches beyond the informed public must take into account the full universe of today’s content creators—not simply the traditional media.

A search engine’s ﬁndings are now the most trusted source of general news and information. Search engines are more trusted than traditional media by a measure of ﬁve percentage points—a gap that widens to eight points for Millennials. One’s “friends and family” are more trusted as content creators than journalists by more than 30 percentage points.

At the same time, building trust relies on a number of diﬀerent forms of engagement. In fact, while blogs, social media and traditional media interviews are all seen as fundamental to building trust in CEOs, communication via industry conferences is viewed with even more importance.

As mentioned previously, businesses need to also rally employees to become their brand advocates. Employees, whose trust levels (52 percent) are on the rise. Respondents are more likely to trust an employee compared to a CEO for information on treatment of employees (48 percent versus 19 percent) and information on business practices and crises (30 percent versus 27 percent).

One of the more surprising findings from the 2016 Edelman Trust Barometer was the swing in trust towards business.

Despite the general population’s skepticism of business, findings indicated that the sector had the best opportunity to bridge the trust gap:

Perhaps unsurprising to many, business is also significantly more trusted than government in 21 of 28 countries, with large gaps in countries such as South Africa (44 points), Mexico (44 points) and the U.S. (12 points).

This new found position of strength for the business sector has also recharged credibility of the CEO as a spokesperson:

Yet, typically most CEOs believe that their duty is to focus on the operational and ﬁnancial aspects of the company when communicating. This year’s Barometer indicates that the focus of CEOs is misaligned with what the general population believes to be most important. For instance, most say that CEOs focus too much on short-term ﬁnancial results (67 percent) and lobbying (57 percent). Equally important, 49 percent say that they do not focus enough on job creation and 57 percent say they don’t focus enough on positive long-term impact.

So, CEOs cannot just focus on operational and financial narratives – alone, they are insuﬃcient for fostering connection and building trust.

In a world where inﬂuence has moved to the mass, making the human connection through the story of personal experience and shared struggle is more important than ever. Almost eight in 10 say that hearing information about personal values is important to building trust in a leader. Just as important is hearing about the obstacles a CEO has overcome, their personal success story, and how their education has shaped them. 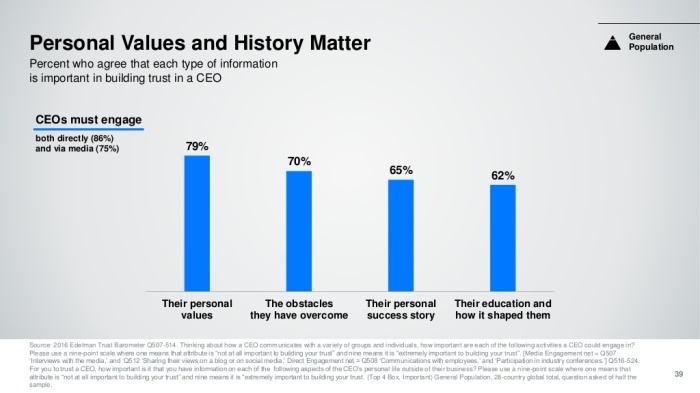 The 2016 Edelman Trust Barometer revealed that respondents are increasingly reliant on a “person like yourself”, who, along with a regular employee, are significantly more trusted than a CEO or government official. On social networking and content-sharing sites, respondents are far more trusting of family and friends (78 percent) than a CEO (49 percent).

“This year’s data reinforces the trusted role that search and social technology platforms play in taking a fragmented landscape of published content and re-aggregating it in a fashion that often directly reﬂects an individual’s worldview. The data reinforces the need to build integrated communications programs that map the total journey stakeholders take to consume information,” opines Steve Rubel, Chief Content Strategist.

In sync with the emergence of a widening trust gap, inﬂuence today decidedly rests in the hands of the mass population. The net result is a new phenomenon where the most inﬂuential segment of the population (or 85 percent of the population) is at the same time the least trusting. This reality stems from the fact that “a person like yourself,” or an average employee, is far more trusted than a CEO or government oﬃcial. In fact, a person like yourself is almost twice as trusted as a government oﬃcial.

Peer-inﬂuenced media—including search and social—now represents two of the top three most-used sources of news and information. Both search and social outrank every traditional source of information, with the exception of television, in terms of frequency of use. And increasingly, peers inﬂuence purchasing decisions, with 59 percent saying they’ve recommended a company to a friend or colleague in the last year, and according to the 2015 EARNED BRAND study, 75 percent saying that they made a decision about a brand based on a conversation with a peer. 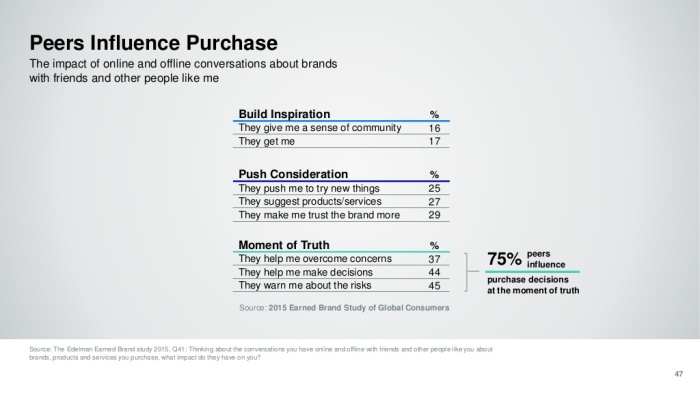 The Barometer shows that trust in employees as credible spokespeople for companies is on the rise: in 2016, 52 percent agree that employees are a credible source of information—four points greater than a year ago.

In several areas, employees are viewed as the most trusted sources of information, particularly when it comes to communicating on ﬁnancial earnings and operational performance, a business’ practices or handling of a crisis, and how it treats employees and customers. In each of these areas, they outrank a company CEO, senior executive, activist consumer, academic, and media spokesperson as far as trust and credibility.

“Virtually no spokesperson is more trusted than a company’s own employees. And yet, one out of every three employees doesn’t trust his or her own company. For nearly every company, deeper engagement with employees is a low hanging fruit—and a direct avenue to growing trust in business, at the organizational level, and at the institutional level,” said Michael Stewart President & CEO, Europe & CIS for Edelman.