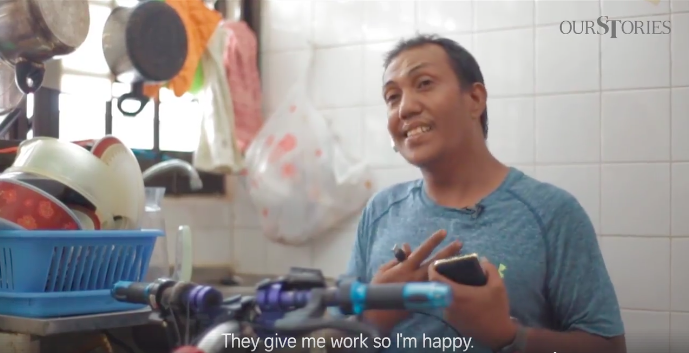 I first learned about Mr. Kamas Mohammad when an UberEATS consumer shared how Mr. Kamas travelled 2.5km in a wheelchair to deliver his order. We got in touch and invited Mr. Kamas to share more about his story during UberEATS Singapore’s first anniversary in July. Besides delivering with UberEATS, we learned that he was also a para-athlete who represented Singapore at the 2015 Asean Para Games in wheelchair basketball.

In a very inspiring video (I really encourage you to watch it and add to the +52k views garnered since it was published 2 days ago!), Mr. Kamas shares his life story and how he delivers with UberEATS. He spoke about how grateful he felt being able to find a way earn his own income and care for his cancer-stricken elder sister through UberEATS, saying, (Translated) “They let me work, so I’m happy. I’m more encouraged to work. Since they let me work, I feel compelled to repay them by working hard. As long as I can work, I will work.”

Besides the video, The Straits Times also shared more in a written feature story. The story appeared online as well as in print – earning a front cover mention, as well as taking up 2/3 of a page in its “Top Of The News” section. 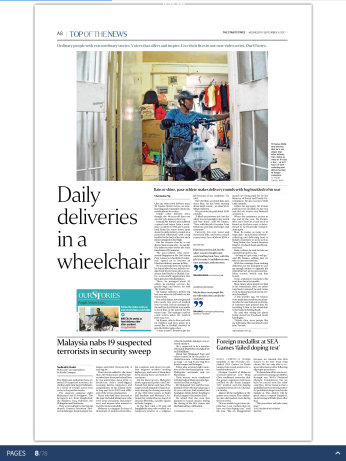 Once again, Mr. Kamas was effusive of his experience with UberEATS, saying, “I liked my previous job, but the salary was not enough to pay rental and buy food. Now, with this job, it is easier. I can follow my own time and target, and earn more.”

He also shared that seeing his photo being shared on Facebook made him happy: “Maybe then, more people like me will realise they can also do such jobs.”

As I’ve said before, this is the kind of technology-changing-the-world awesomeness that I signed up for by joining Uber!